How to control the risks of anthrax disease in the construction industry. 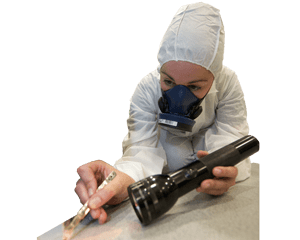 Anthrax is a serious infectious disease found throughout the world. It is not common within the U.K. but continents such as Africa and Asia experience more cases. The last reported case of a human infected with the causative agent of anthrax (a bacteria called Bacillus anthracis) was in 2008. Although it is rare, people can get very sick from the disease.

How can humans contract anthrax?

From time to time surveillance regimes within the U.K. report very rare cases of anthrax in cattle. Humans can develop the disease if they come into contact with contaminated animals or animal products. It can be found in things such as animal hair, wool and meat.

Bacillus anthracis the causative agent of anthrax, is a special spore forming organism. It is unlike most other bacteria. It is extremely resistant to desiccation, chemical, radiation and heat disinfection. These spores can survive in harsh conditions for decades or even centuries. They have been found in graves, ancient building materials and even Antartica.

Bacillus anthracis is a hardy bacteria that survives well in aerosols. The Ministry of Defence had a keen interest in these properties. After the war, they spent a lot of time in the 1940s experimenting with the organism on Gruinard island. Thankfully, Biological warfare has been prohibited and this work was stopped. In the 1980s, it took a lot of money and technical expertise to decontaminate the land and sell it back to the original owner.

What diseases can anthrax cause?

Anthrax can cause several types of disease. The most common are:

Why is anthrax a concern to the construction industry?

Anthrax is a concern to the construction industry. It can present a risk when disturbing lath and plaster, or old, potentially contaminated land. Horse hair which was potentially contaminated with anthrax was commonly used in the formulation of lath and plaster. Anthrax spores can lay dormant for decades or 100s of years. This means that there is a potential of human exposure to virulent spores when old buildings are disturbed.

What precautions should be taken?

The Health and Safety Executive recommends adopting their ‘Assess, Review and Control’ model. This provides a framework for the management of anthrax risk on building sites.

Despite the general risk of anthrax being low. At the beginning of any project, an assessment of the risks it presents should be made. Generally, it is best to appoint an expert who has experience in assessing these risks. Consideration should be given to the historic use of the building site. The types of questions that should be asked, include:

Following the completion of the assessment, the expert will specify the controls necessary. This may include a preventative approach. They may recommend sampling of soils and building materials. If adopted, sampling should be completed using a documented sampling regime. The samples should be sent to a laboratory for analysis so that an indication of risk can be established.

In contrast, a precautionary approach could be adopted. Controls may include:

In practice, it is likely that a combination of the above control measures will be recommended. Together, they would help to reduce the risk of exposure.

Finally, as per all construction projects, a continuous review of the risk assessment should be performed. This will ensure that controls such as work methods are effective, and that PPE and RPE are being used correctly.

Our anthrax consultancy services meet the standards of ISO: 9001.

"Always helpful and we receive results on or before requested date."

Helping you navigate the complex dangers of anthrax

Established in 2002, Scientific Services have been sampling and testing samples for anthrax spores for over 12 years.